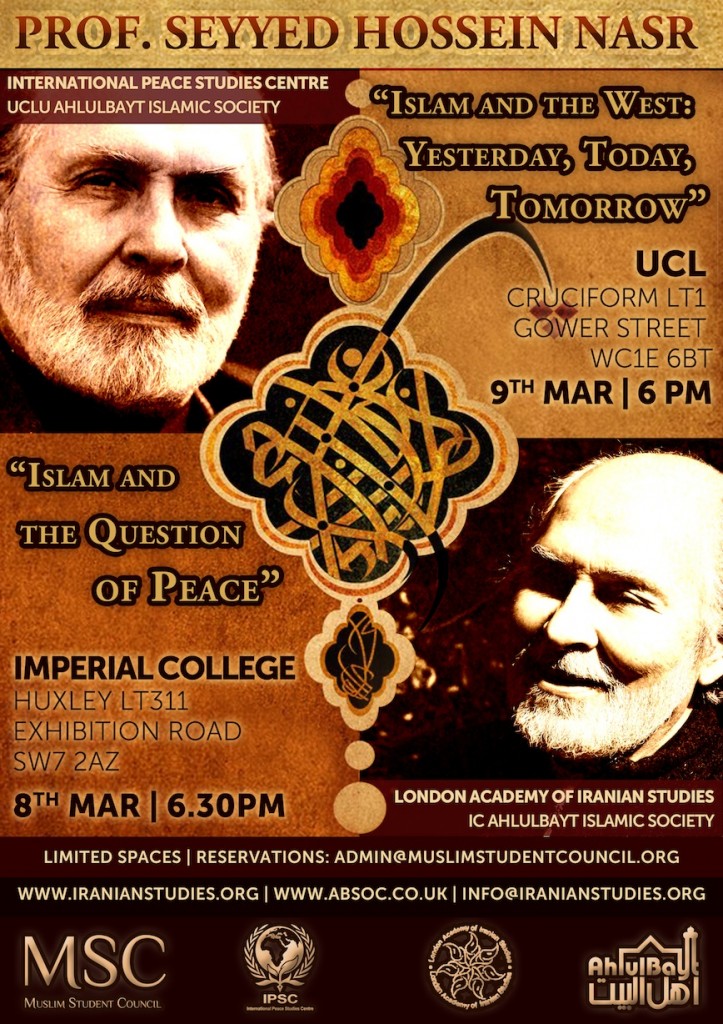 ISLAM AND THE QUESTION OF PEACE
Event Synopsis
by S. H. Nasr
Many today show concern for the question of peace in relation to Islam and the Islamic world. But few delve into the deeper dimensions of the meaning of peaceor ask why it is that Christians call Christ the Prince of Peace while fighting so many wars or why Islam, that is derived from the Arabic word for peace (salām), is involved in so many battles both within itself and with invading Western armies. Peace is an inner attitude and we must be at peace within ourselves in order to create a society at peace. To be at peace with oneself must in turn be based on being at peace with Heaven and involves also being at peace with not only the human world, but also the world of nature. How can a civilization in which there are many who are in rebellion against Heaven and where the very life style of most people is based on war against the natural order be at peace with itself and others? In such conditions to speak of peace is to speak of an unrealizable dream.
In Islam the idea of complete surrender to God (taslīm which is also related to the word for peace in Arabic) is central and the spiritual path to universal peace(ṣulḥ-i kull in Sufism) has always been available to those who seek real peace. Jihād, which is usually mistranslated as holy war, itself means exertion to create both withinand without equilibrium and harmony which alone lead to peace. But Islam is faced today with challenges and tensions that make the establishment of equilibrium andpeace very difficult. These challenges and tensions include cultural and intellectual ones resulting from the invasion of the Islamic world by Western ideas and norms as well as actual military invasions; challenges of extreme responses to Western domination by some Muslims a few of which carry out horrendously violent acts that are against the teachings of Islamic Law (Sharī‘ah); challenges of various local nationalisms that threaten the unity of the Islamic world; challenges of confronting those Western interests in the Islamic world which are against Islamic interests and many other challenges and tensions. All of these challenges require exceptional effort to try to reach and establish peace on all levels from the individual souls of men and women to society at large.
On the more external level the establishment of peace between the Islamic world and the West requires before everything mutual acceptance and respect. Both sides have to learn to accept the other rather than vilifying it and to realize that on the highest level the other is our self.
ISLAM AND THE WEST – YESTERDAY, TODAY AND TOMORROW
Event Synopsis
by S. H. Nasr
The yesterday of the historical relations between Islam and the West may be said to cover the period from the rise of Islam to the Second World War. For the sakeof analysis one can divide those many centuries into three eras: from the 7th to the 14th centuries during which Islamic civilization was more powerful than the West andinfluenced Europe deeply in fields ranging from philosophy and even theology to art and literature to technology. This period was followed by the era from the 14th tothe 17th century when Europe became more powerful especially at sea and began to encroach upon and colonize the edges of the Islamic world while powerful Muslim empires still persisted. The third epoch stretching from the 17th to the 20th centuries was witness to the weakening of the Islamic world and greater Western colonization ofit, a colonization that was not only military and political, but also intellectual, educational and cultural including artistic. But this period was also witness to Muslim resistance to the West much of it religious but also some nationalistic as traditional Islamic political structures weakened or crumbled and nationalism in its Western sense spread to much of the Islamic world.
The today that is considered here may be said to begin with the years around and after the Second World War when Muslim countries gained their nominal political independence. But despite this so-called independence, the invasion by the West of the Islamic world in domains of culture, thought, art, life style and even political philosophy continued and even increased. This situation helped to bring about powerful Islamic movements in different forms, new Western military invasions ofseveral Islamic countries and the more recent Arab or Islamic Awakening which the West now seeks to guide and direct in its own favor. This period is also marked by thespread of Islam into the West in a manner that is historically unprecedented.
As for tomorrow, there is no doubt that Islam as a religion will remain very strong in various Islamic societies and Islamic civilization will seek to revive itself amidst many intellectual and political crises in its midst at a time when the West itself is in a major crisis that is not only economic and social but most of all spiritual. In any case the destinies of Islam and the West have been intertwined historically and are bound to continue to be so in the future, as far as one can see.