Transcendent Philosophy Journal Volume 18, Number 29, December 2017, has been published by the London Academy of Iranian Studies. 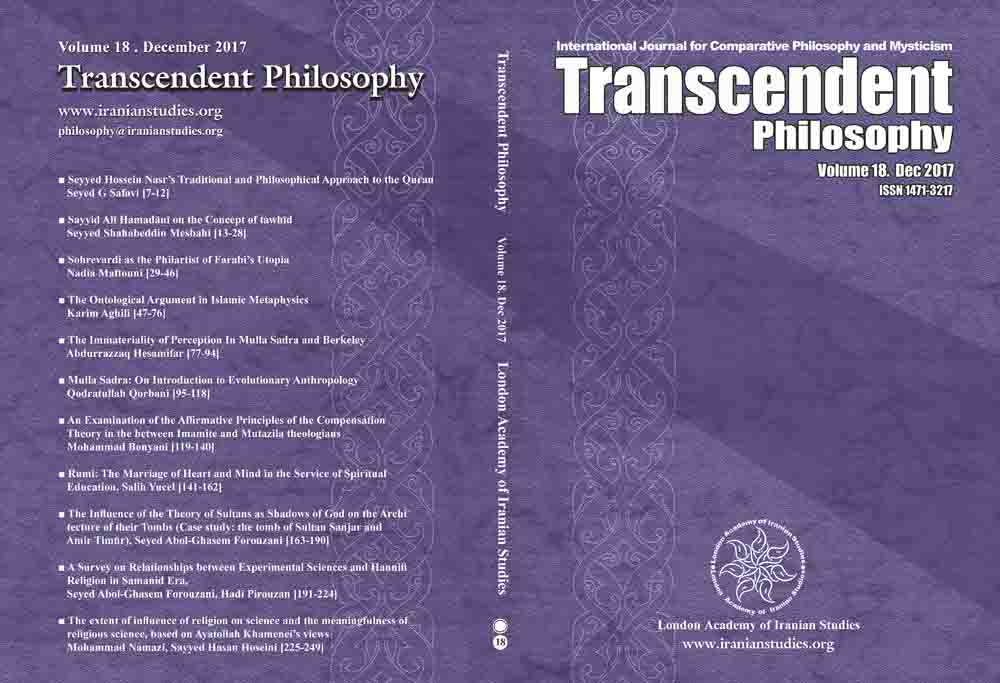 Transcendent Philosophy Journal is an academic peer-reviewed journal published by the London Academy of Iranian Studies (LAIS) and aims to create a dialogue between Eastern, Western and Islamic Philosophy and Mysticism is published in December.

To view past volumes of the Transcendent Philosophy Journal click here.

Mulla Sadra: On Introduction to Evolutionary Anthropology
Qodratullah Qorbani [95-118] An Examination of the Affirmative Principles of the Compensation Theory in the between Imamite and Mutazila theologians
Mohammad Bonyani, Hamidreza Sarvarian [119-140] Rumi: The Marriage of Heart and Mind in the Service of Spiritual Education
Salih Yucel [141-162] The Influence of the Theory of Sultans as Shadows of God on the Architecture of their Tombs (Case study: the tomb of Sultan Sanjar and Amir Timūr)
Seyed Abol-Ghasem Forouzani [163-190] A Survey on Relationships between Experimental Sciences and Hannifi Religion in Samanid Era
Seyed Abol-Ghasem Forouzani, Hadi Pirouzan [191-224] The extent of influence of religion on science and the meaningfulness of religious science based on Ayatollah Khamenei’s views
Mohammad Namazi, Sayyed Hasan Hoseini [225-249]